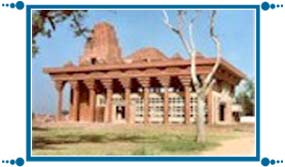 Location: 8 km from the Chandigarh

Chandigarh Mansa Devi temple is a very famous shrine located at Panchkula, which is about 8 kms away from the city. This holy Siddh Peeth is dedicated to Mata Mansa Devi. According to the Hindu mythology, the head of Devi Sati had fallen over here. Mansa Devi Temple near Chandigarh basically houses two temples. The temple that is located near the parking lot is said to be the main temple. It was established in the year 1815 A.D by the ruler of Mani Majra. The credit for setting up the relatively new temple goes to the Maharaja of Patiala. Adjoining to the Chandigarh Mansa Devi mandir, there is a beautiful garden consisting of sacred plants. People come from all over the world to pay homage to the goddess. During Navratras, fairs take place in the surrounding areas of Mansa Devi temple.