Here is provided information on the culture of Chandigarh, India.
Chandigarh: Chandigarh Culture 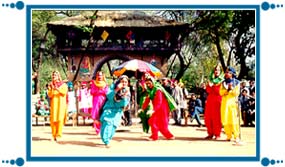 When it comes to Chandigarh culture, this city reflects a blend of different cultures within the country. It can be attributed to the fact that Chandigarh has attracted people from virtually all parts of the country. It houses several Central Govt institutions, branches of almost every national bank & research institutes. Also, there are large establishments of Air force and army. This explains the reason for Chandigarh being a land of multicultural people. Read on to know more about the culture of Chandigarh, India…

Chandigarh is a cosmopolitan city that has always encouraged the various diverse groups to intermingle with each other. Therefore, one can find several bhavans and sabhas over here that are actively involved in the task of promoting different cultures. The blending of distinctive cultural aspects is also reflected in the architectural style of the shrines of this city. Apart from the typical north Indian style, you can also find places of worship in the styles of Kerala, Tamilnadu, Orissa & Bengal.

Also, the folk music and dances of different communities are given a boost. Various exhibitions and workshops are conducted to showcase the talent of people. As far as the language is concerned, Hindi and Punjabi are the two main languages that are spoken here. However, among the youth it is usually Hinglish (combination of Hindi and English) that is becoming increasingly popular. It is a city, where you can find yummy mouthwatering food. There are different choices of cuisines to choose from. The city has plenty of fast food joints, South Indian & Chinese restaurants.