Here is given information on the Punjabi traditional food & the cuisine of Chandigarh, India.
Chandigarh: Culture : Chandigarh Cuisine 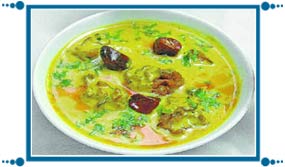 When it comes to North Indian cuisine, the first thing that strikes mind is the Punjabi traditional food. There is nothing specific as far as the Chandigarh cuisine is concerned. It is mainly the Punjabi food that forms part of cuisine of Chandigarh, India. Punjabi cuisine is popular not just among Indians, but also among the foreigners. The staple food mainly consists of wheat-based rotis, paranthas and naan.

The main feature of Punjabi food is the extensive use of butter, cream, ghee and cheese. Their meals usually consist of pulses cooked on a slow flame with the traditional Punjabi tadka. For preparing the gravy, a mixture of onion, tomato, ginger, garlic and spices are used. Usually the traditional Punjabi food is prepared in the earthen tandoors, which give the food a unique aroma. In the category of beverages, one name that truly deserves a mention is the Punjab-di-Lassi.